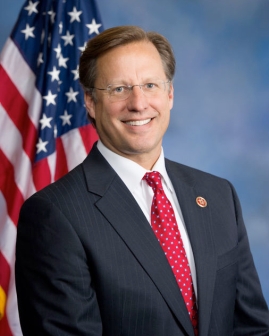 David Brat is mad. He’s mad at Obama for asking Christians to be, well, more Christian. In a recent interview, Brat, a republican Member of the House of Representatives from Virginia, said that he was very upset with Obama. And in other news, water is wet. Kidding aside, Brat is upset because Obama used teachings that are part of Christianity to urge elected officials to be more compassionate. As was first reported by Right Wing Watch, Brat said that Obama “is using the Christian tradition and trying to bring about compassion by bonking Republicans over the head with the Bible.” He went on to say that Obama is “mocking his enemies in order to compel a larger federal state using the tradition of love,” and further stated that “our side [the conservatives] needs to reeducate its people that we own the entire tradition.”

I understand that people get mad when their own words are used against them. I can appreciate that, but maybe, just maybe, when we’re called out for hypocrisy, we should be upset at ourselves for being hypocrites, instead of being mad at the person who pointed it out. To be fair, however, there’s a part of me that see’s Brat’s point, but only a little bit.

In some ways, it reminds me of an episode of the West Wing (OK, what doesn’t remind me of an episode of West Wing?).  In season 4, episode 20, “Evidence of Things Not Seen,” the characters are playing a game of cards and spewing their witty lines. C.J. Craig, the press secretary is particularly happy, even though earlier in the episode the White House was crashed by secret service because somebody shot at the windows.

Here’s the transcript (I couldn’t find a clip on youtube):

LARRY: You know, you’re particularly upbeat for someone who’s been shot at twice in four years.
CJ: Am I?
TOBY: Yes.
CJ: That’s ’cause I’ve got faith there, mi compadre.
TOBY: Faith?
CJ: The substance of things hoped for and the evidence of things not seen.
TOBY: Yeah, but I think what he’s asking… Bump ten [Toby places a bet]… I think what he’s asking is why most other nights do you think the world’s going to hell in a hula hoop, but tonight…?
CJ [Interrupting]: We dipped twice and eat gefilte fish?
TOBY: Suzy Cream Cheese, do not attempt the hagaddah.
CJ: I know how to bless the soup too.

It’s all in fun, and it’s kidding around, but Toby is asserting his “ownership” of his Judaism in the same way that Brat is doing. There are key differences. Obama is a Christian. Toby’s comment is, first, playful, not hostile, and second, aimed at somebody who actually isn’t a member of his faith. For Brat to assert his ownership, and challenge Obama’s, he has to believe that Obama is not a Christian. This may be the root of the issue, which, to me, highlights the alternate reality in which many people like Brat seem to operate. Nevertheless, I’m sympathetic to the you-aren’t-one-of-us you-don’t-get-to-use-our-stuff feeling. I’m not a practicing Jew, I don’t follow Jewish law, and, in religious terms, I’m not a Jew; but I was born and raised in a Jewish family and I subscribe to the school of thought that Judaism is an ethnicity as much as it’s a religion. I therefore, consider myself a Jew…a secular Jew, but a Jew nonetheless. So when people like Sarah Palin wear a Star of David and pander to Jewish voters by professing their love of Jews, it bothers me immensely. First, because she doesn’t get to wear that symbol of Judaism. It’s not hers, she’s not one of us (unfair as that may be, I have that initial visceral reaction). Second, because I’m pretty sure that her professed love of Jews stops as soon as somebody reminds her that Jews don’t think Christ was divine, and aren’t some cute old vestige of her more correct faith, are more likely to be pr0-choice. Her love of all things Israel might evaporate when she realizes that the only thing she probably really likes about Israel is that they aren’t  a Muslim theocracy. She sure wouldn’t like their abortion laws, the fact that gay men and women have been openly serving in their military since 1993 (17 years before the US caught up), that they are very tolerant and supportive of same-sex unions, or that they have mandatory and universal health care coverage since 1995. So, for these reasons, if Obama weren’t a Christian, I could sympathize with Brat’s comments.

But Obama is a Christian whether Brat wants to believe that or not. So I’m left wondering how somebody like Brat sees his own religion and the values that his religion compels him to embrace. Is he denying that love and compassion are part of the teachings of Christ? Obama is “mocking his enemies in order to compel a larger federal state using the tradition of love.” If the tradition of love is important to Brat, shouldn’t he and Obama be on the same side here? Should it really require bonking anybody over the head with anything to get them to be compassionate and loving?

This is the kind of thing that frustrates me about it all. Had Brat said something like, “I appreciate that caring and compassion that Obama is trying to get us to adopt, and I feel that care and compassion, but I’m also moved by a desire to protect my constituents, and I do not want to be the one who paved the way for a terrorist to enter our neighborhoods,” it wouldn’t feel so awful. That feels like rational discourse. I miss rational discourse so much.

In the end, what we have here is somebody having their own words used against them. Obama has pointed out the hypocrisy in the positions of people like Brat. They gather voters by espousing their Christianity, but when it’s pointed out that they aren’t acting very Christ-like, they don’t stop to explain what they’re doing, they lash out. They are revealed to be hypocrites, and it clearly makes them mad. But here’s what I think is important: we should point our anger where it belongs. If you’re angry at somebody for calling you a hypocrite, it might be because you actually are a hypocrite. If Obama had called Brat a green-eyed zumbaplex, Brat probably would have laughed and ignored it. Brat gets upset here because there’s truth to what Obama is saying. There is a conflict of action and ideals of the religion that means so much to Brat. His hypocrisy is revealed, but instead of being angry at his own hypocrisy, he gets mad at Obama. That’s too bad, because I think some soul searching about the internal conflict that’s obviously there would help, not just Brat, but the people he serves too.