Today is International Women’s Day 2017, and it’s probably not a coincidence that I had a thought about being a feminist this morning while driving to work. It’s surely a thought that many have had, and, like everything else I write about here, it’s coming from a complete amature position, so take it with a grain of salt. I consider myself a feminist, and have written before about being a male feminist. There are many people out there who are turned off by that word, and people who I consider feminists who might refuse to call themselves that. It made me wonder if there was something about the word itself that people rejected. And that thought got the figurative wheels in motion while the literal wheels were moving under me.

I wonder if the problem is the suffix, -ist. Merriam-Webster has a definition for the suffix that’s worth considering. 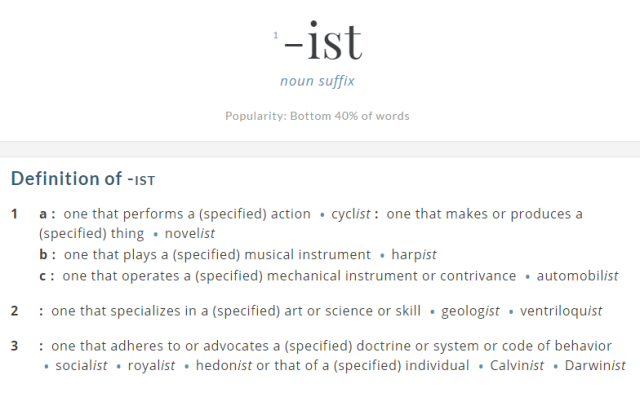 We see that the first definition doesn’t work for the -ist part of feminist, because a feminist isn’t somebody who performs or produces women. The second one doesn’t work either, because a feminist doesn’t specialize in the skill of being a woman (although many are, indeed, very skilled in many ways). The third definition is clearly the one that applies here, adhering to or being ad advocate of a doctrine or system or code of behavior. Here’s where it breaks down a bit: the other -ists in this line are often about superiority over something else. A Darwinist places Darwin’s theory of evolution by natural selection above any other view of how evolution happens. A royalist places the king above all. A racist places his/her race above others, while a nationalist places his/her country above all others. For most uses of that suffix, in the third of the Merriam-Webster definitions, it’s not about equality (which is how I see feminism), but about superiority. I wonder if, under the surface, that’s at least part of why it’s been so easy to make people turn off to the term, even if they believe what it generally stands for.

In this respect, I think there have been nice approaches to combating this. “Women’s rights are human rights” is an excellent example. It makes it clear that it’s not about superiority, it’s about extending rights given to all other humans to women. It makes me wonder if we should stop using “feminist,” and instead use something like “equalist.” I bet we could get pretty much everybody signing up to be called an equalist. Maybe it would change expectations in the same way that I wrote about a while ago here.

Just a thought, from a feminist equalist.

3 thoughts on “A feminist by any other name…might be an equalist.”